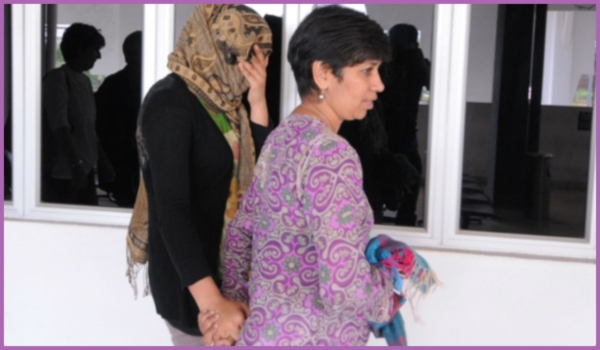 In spite of sustained advocacy from sexual and reproductive health (SRH) and human rights advocates, and penal code amendments in 1971 and 1989, which opened up more grounds for abortion, access to safe, legal abortion remains heavily restricted in Malaysia. Before these changes, several prosecutions were taken against medical professionals. Since them, only one woman has been prosecuted for abortion – a Nepali migrant worker named Nirmala in 2014, who spent four months in prison and was acquitted on appeal.

This report looks at the abortion law and access to abortion in Malaysia and reviews calls to change the law and access by SRH and human rights advocates. The report ends with a discussion of the cases against medical professionals, prosecutions of women for infanticide and the case of Nirmala.[1]

Abortion law originally came to Malaysia under the British Empire’s Indian 1871 penal code, which criminalised abortion on all grounds.[2] Other laws and regulations have come in since then. For example, the 1956 Medicines Advertisement and Sale Act prohibited the publication of advertisements relating to abortion. This carries a sentence of up-to two years’ imprisonment, and/or a fine of US$1,316.[3]

There have been two ground-breaking amendments to section 312 of the penal code – one in 1971 to permit abortion to save a woman’s life, and another in 1989 to allow abortion to preserve a woman’s physical and mental health.[4]

Although there is a scarcity of data on the prevalence of (illegal) abortions, the Federation of Reproductive Health Associations Malaysia (FRHAM) has estimated that there are about 90,000 abortions annually in Malaysia.[6] The Reproductive Rights Advocacy Alliance Malaysia (RRAAM) report that there are an estimated 240 clinics nationwide offering abortion services, but not all have been vetted for quality of care or safety.[7]

In 2012, FRHAM highlighted the urgent need for standardised guidelines on safe abortion service provision. The Ministry of Health subsequently released Guidelines on the Termination of Pregnancy in Government Hospitals, based on the guidelines of the UK Royal College of Obstetricians and Gynaecologists. The guidelines aim to:

“Create awareness among government health care professionals of the complexity of the issues of induced abortion and to be mindful of the existing provisions given by the professional ethics, legislation, religion and reproductive rights during consultation with the woman client.”[8]

Although the contribution they make has been praised,[9] there has been very little change in access to abortion in government facilities since then. Dr Choong said that many pro-choice advocates believe this lack of change is due to the attitudes of some senior government gynaecologists.[10]

Mifepristone is not registered in Malaysia, while misoprostol is officially available only on prescription.[11] Access to abortion pills online however, means that women are taking matters into their own hands. Women on Web (an online abortion-pill provider) found that in 2015, 33,781 Malaysian women visited their online portal, while 1,109 contacted their helpdesk. Their study revealed that there is a great need for accurate information on and better access to medical abortion pills in Malaysia.[12]

In 2016 RRAAM facilitated a policy discussion attended by various high-level governmental and non-governmental stakeholders.[14] Among many topics of discussion, the meeting questioned why medical abortion pills were difficult to access in Malaysia and why mifepristone was not registered, despite clear evidence of its safety.

There has also been resistance to this progressive narrative, however. In January 2017 for example, it was widely reported in the Malaysian press that the Minister of Health, Datuk Seri Subramaniam, threatened the investigation and prosecution of anyone selling or purchasing medical abortion pills online. He said that it is difficult to detect when orders are placed online for purchases from abroad, but that the MoH was working with the police and customs to detect packages containing such pills coming into the country, and also to establish whether the pills were being sold locally.

Infanticide is often a direct result of the criminalisation and inaccessibility of abortion. Section 309 of the penal code states that punishment for infanticide is imprisonment of up to 20 years, and a fine. Between 2005 and 2011, there were 517 cases of abandoned babies recorded in Malaysia. In 2016, the number of abandoned babies recorded was 115.

In 2010, the Women, Family and Community Development Minister, Datuk Seri Shahrizat Abdul Jalil, reported that the government had decided to classify “baby dumping” that resulted in the death of the baby as a crime that warranted the death sentence. The Prime Minister clarified the following day that the minister had in fact intended to say that cases of such deaths should be “investigated” as murder, but that it was for the Attorney-General to determine whether the circumstances justified a murder charge.[15]

The case of Nirmala

Nirmala migrated to Malaysia from Nepal with her husband and was working at the Sony factory; her husband was working as a security guard. When she was 24 years old, Nirmala got pregnant and opted for an abortion at six weeks into her pregnancy, as she feared losing her job. It so happened that the authorities raided the health clinic where she had her abortion on 9th October 2014 in Penang, and she was arrested. The doctor who provided the abortion was also arrested.[16]

Nirmala was swiftly charged and convicted one month after her arrest, in the absence of legal representation. She was sentenced to a year’s imprisonment, thus becoming the first woman in Malaysia to be sent to prison for abortion.[17]

After repeated attempts to determine which prison Nirmala was being held in, abortion and human rights advocates found her and reported that she was in deep distress over her situation.

Advocates found Nirmala a pro-bono legal team who submitted an appeal against the conviction and sentencing to the Penang High Court. They also applied for the court to exercise its judicial powers to review the whole case.[18]

The Judicial Commissioner, Datuk Nordin Hassan, said on the basis of the evidence that he was giving Nirmala the benefit of the doubt. He said he had looked through the facts of the case in which three main issues emerged, namely, her lack of understanding of the import of her guilty plea, the lack of evidence of the offence she had pleaded guilty to, and the language used when she was charged and convicted.[19]

The Penang High Court thus quashed the conviction and sent the case back to the lower court, where Nirmala was charged again. During the eight months that this trial lasted, Nirmala was released on bail, thanks to Dr Choong,[20] but she was left unemployed and had to live in a shelter for migrant workers.[21]

Dr Choong worked closely with Nirmala’s lawyer and said that he urged him to use section 312 as a defence in the new case. However, the lawyer pursued a different approach and managed to get Nirmala acquitted on the ground that forcing her to continue the pregnancy posed a risk to her life, given her particular circumstances.[22] The Bukit Mertajam Sessions Court under Judge M Vijayalakshmi acquitted and discharged Nirmala on 21st September 2015, saying that the prosecution had failed to present a prima facie case. Afterwards, Nirmala’s lawyer said: “The court’s decision has exonerated her, and it is an unprecedented case.” [23]

Following Nirmala’s acquittal, a case against her physician, Dr NG, was pursued – but on the day of the hearing, when the defence went into chambers to seek a clarification of the charge against Dr Ng, the prosecution decided to reconsider the charge and after consultation with the Attorney General’s Chamber, he decided to withdraw the charge completely.[24]

Following Nirmala’s acquittal, the Joint Action Group of Gender Equality (JAG) an umbrella body of 11 women’s rights groups in Malaysia, issued a statement urging the government to take responsibility for what had happened to Nirmala and ensure that “no other woman will be hauled to court in the future over their decision to undergo an abortion.”[25]

There has been no public response to these concerns to date, and it is still uncertain what will happen following the Minister’s threat to crack down on medical abortion pills.

Nirmala’s landmark case has still not been taken seriously by the government, even as advocates are pushing for it. A new change in government in Malaysia, however, does bring hope, as it promises to pay more attention to human rights. Everyone agrees that until the law is changed in a positive way and the guidelines implemented, women and healthcare providers remain at risk of prosecution in Malaysia.

Many thanks to Saira Shameem and Dr Sim-Poey Choong for contributing information for this paper and for guidance in the research process. We laud the tireless campaigning and research carried out by the Reproductive Rights Advocacy Group Malaysia (RRAAM), the Joint Action Group for Gender Equality (JAG), the Asia Safe Abortion Partnership (ASAP), and the Asian-Pacific Resource and Research Centre for Women (ARROW), as well as the journalists who have sought to spotlight the continuing injustice.

We want to keep these reports as updated and as comprehensive as possible. If you have any more information regarding the above cases, or new cases that have come to light, please contact Nandini Archer: nandini@safeabortionwomensright.org.

[1] We have purposely not provided Nirmala’s surname, even though it was reported in the media at the time. We do not see why she should be easily identifiable.

[8] Ministry of Health (2012) Guidelines on the Termination of Pregnancy in Government Hospitals www.moh.gov.my/images/gallery/Garispanduan/Guideline%20On%20TOP%20for%20Hospitals%20in%20MOH.pdf