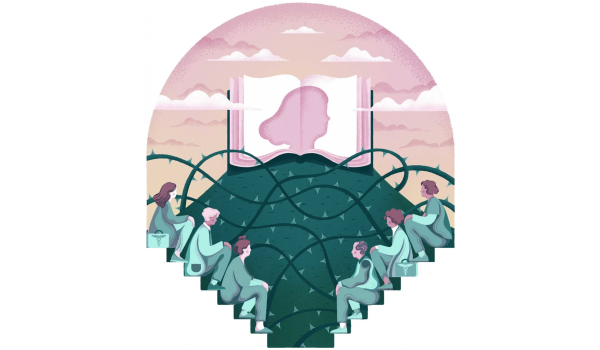 I wanted to provide abortions for my patients. My medical school wouldn’t teach me how.

“Last year brought one of the toughest moments I’d ever faced as a family doctor. A woman had shown up for her appointment after a three-hour drive to one of our clinics in Arkansas, and we had to turn her away. A state restriction had gone into effect, requiring that abortion providers contract with a physician who has hospital-admitting privileges.

“My staff and I had been attempting to comply with the law since it was passed in 2015. We reached out to every OB/GYN we could find. Receptionists would hang up on us or refuse to take a message. The doctors who did answer said that while they might personally support a woman’s right to choose, their colleagues did not. One told me that for him to sign on as a backup, he’d need permission not only from his hospital administrator but also from the Diocese of Little Rock – “and after that,” he added, “the pope.” We finally found a willing obstetrician in November.

“This fear doesn’t surprise me. Medication abortion is one of the safest procedures out there; it’s less risky than wisdom-tooth extraction (which requires anaesthesia). But doctors and nurses in Arkansas are so afraid of abortions – and the attendant politics – that it’s almost impossible to learn about them as a medical student, let alone administer them. Where I grew up, in the River Valley of western Arkansas, nobody said the word “abortion” out loud. When I went to medical school at the University of Arkansas for Medical Sciences (UAMS) in Little Rock, that censorious silence didn’t relent. Over four years, the most exposure we got to the topic was a half-hour guest lecture. (At that time, 17%
of medical schools offered no formal abortion education, according to a national survey published by the American Journal of Obstetrics and Gynecology.)

“That implicit disapproval carried over to my residency in family medicine, which I began in 2008 at UAMS West in Fort Smith. Second-year residents gave presentations on a topic of their choice – and mine, on abortion, was the most highly attended and contentious that year. A senior faculty member vocally disagreed with my description of abortion as a common medical service, interrupting every few sentences and quoting the Bible at me. Someone dubbed me the “abortion chick,” and the nickname stuck. Whenever a patient at the clinic wanted to learn more about terminating a pregnancy, the staff would call me in to talk her through her options, even when I wasn’t scheduled on a shift…

“Today, I am one of four physicians regularly providing abortions in Arkansas, which is home to 1.5 million women…”

Stephanie Ho is the director of primary care for Planned Parenthood Great Plains.