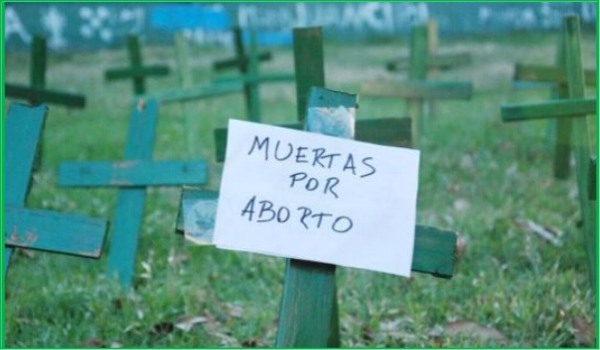 Two women have died in Buenos Aires province since the Senate vote on 8 August. One report has just arrived of a woman who had five children, as we go to press, with no other details. The other was reported on 14 August – a 34-year-old woman who had two children. She had been admitted to Manuel Belgrano Hospital the night before in poor condition, with a stalk of parsley in her cervix. Doctors carried out an emergency hysterectomy and transferred her to the intensive care unit at Magdalena Villegas de Martínez Hospital in Pacheco. She died less than 24 hours later.

Parsley is promoted in online forums as a ‘natural’ way to induce miscarriage, either ingested as a tea or as a supplement but most dangerously, by inserting a bunch of parsley into the uterus through the vagina twice a day, and keeping it there for at least 12 hours. Because the uterus is sterile, germs on the parsley (even if washed) can cause infection which grows rapidly, spreads throughout the body, and is rapidly life-threatening.

Aware of the mood in the country, President Mauricio Macri is said to have offered some sort of “decriminalisation” as a short-term solution. There is currently a commission working on the reform of the penal code. The reform he may propose is about not imprisoning women who have had abortions if, when they are taken to court for breaking the law, the judge considers their reasons justified. However, this is only an idea (and not a well thought out one.).

Meanwhile, the coalition of pro-choice groups published a press release on 15 August in which they condemned the Senate for allowing the situation to continue. Ironically, they point out, misoprostol is already produced in Argentina, and the health system is capable of providing safe abortions. And meanwhile, a woman has died.

Today, 16 August, the movement MuMaLá has announced that they will create a National Registry of Deaths of Women from Clandestine Abortions, as they already do with the national survey of femicides. “With the creation of the register of women who have died as a consequence of clandestine abortions we intend to make visible and continue demanding the passage of a law of legalisation of abortion that supports the hundreds of thousands of women who resort to this practice every year. We all have abortions, but it is poor women who are the ones who die,” said Raquel Vivanco, MumaLá’s national coordinator.

“Those who have voted against the proposed new law have blood on their hands. We will continue fighting with the strength of a feminist youth and the trajectory of a solid and coordinated movement until finally #SeaLey (There will be law).” (Lola Guerra, Católicas por el Derecho a Decidir Argentina, 15 August 2018)