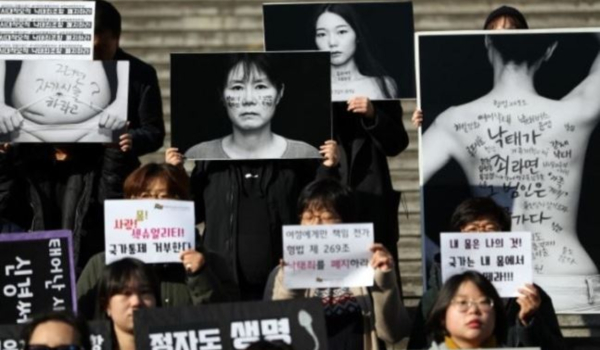 Women’s rights groups in the Gyeongsang provinces condemned a provincial police agency for investigating 26 women on whether they had abortions. Members of the women’s rights groups, including the Gyeongnam Women’s United Association, said they held a meeting with officials at the South Gyeongsang Province Police Agency on Monday and delivered a letter of complaint.

Their protest came after a police station in the province was revealed to have checked whether 26 women who had visited an obstetrician in the region had abortions. According to police, they were granted a warrant last month to acquire personal information of the 26 women from the Health Insurance Review and Assessment Service, after a petition against the obstetrician was received in September.
“We are fully aware that conflicting sentiments exist on abortion,” an officer from the police agency said. “We did ask the 26 women if they had abortions because we received the petition. But we only questioned those found to have had an abortion, as testifiers. We did not arrest them.”

“We cannot hide our fury over the actions of the police at a time when society strongly calls for abolishment of the anti-abortion law and the Constitutional Court is reviewing the constitutionality of the law,” the group said Thursday.