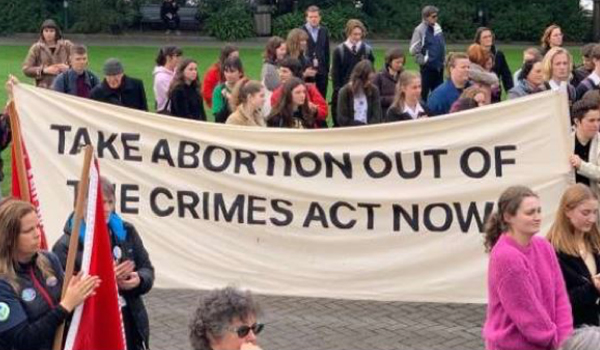 In February 2020, the Select Committee of the NZ Parliament received more than 25,000 submissions on the abortion law reform bill, which if passed will remove abortion from the Crimes Act.

On 9 March 2020, in its second reading, in a confused vote in Parliament, MPs did away with part of the Abortion Legislation Bill that would have made legally protected ‘safe zones’ possible outside abortion clinics on a case-by-case basis. MP David Seymour’s amendment to the bill was voted on in two parts – the first, to have the definition of safe zones removed from the bill, was narrowly voted down 59 votes to 56. Some MPs thought that meant the safe zones were safely still in the bill.

But there was a second part. That was to do away with all the provisions that would put safe zones in place. And with the second part, the Deputy Speaker Anne Tolley took the vote as a voice vote only, and declared that it had been passed. Thus removing the safe zones from the bill. When questioned from the floor by several MPs what they had just voted on, she refused to give way and insisted her interpretation of the voice vote would stand. This was totally unexpected and there has been quite a lot of upset as a result! For Seymour, the safe zones would have set a dangerous precedent against freedom of expression, which is always how the anti-abortion movement rejects safe zones, which are in fact sites of harassment, not free speech.

However, the third and final reading of the bill, at the end of which it will be voted upon, is yet to come. Efforts to reverse the decision to remove safe zones from the bill is, we understand, going on behind the scenes.