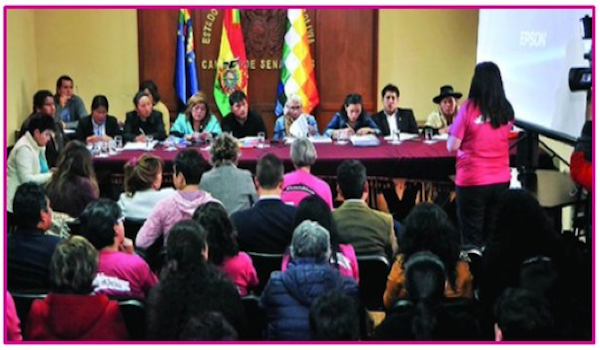 “Give women 22 weeks to decide”, “Not just one legal abortion per woman…” were among the demands presented by advocates from the National Pact for the Decriminalisation of Abortion in Bolivia, a group of 50 organisations from all over the country to a hearing on 11 April, in front of the Constitution Committee of the Chamber of Deputies. The hearing was to discuss amendments that the Committee had tabled to Article 157 of the draft Criminal Code. Instead of the tabled amendments, the Pact called for the Committee to allow legal abortion on broad grounds, including extending the time limit for abortion on request from the proposed eight weeks to 22 weeks, not limiting women to only one legal abortion in their lifetimes, and not making abortion legal only for the poorest women.

The Minister of Health, Ariana Campero, had recently reported that in Bolivia, 13% of maternal mortality is due to unsafe abortions. Responding to this, the Pact’s spokesperson said: “We believe the decision to define abortion as a criminal act is not an answer. The consequences, such as maternal deaths, are a public health problem and disproportionate, and require solutions. The figure of 13% is frightening. There should not be deaths from abortion nor from haemorrhage.”

In a press release dated 11 April, the Pact describe the Committee’s proposed amendments as violating women’s rights and contradicting international commitments made by the State. They argue that these restrictions will not diminish the number of abortions but will continue to have grave consequences for women’s lives and health. They show that the proposed amendments compare unfavourably to the laws on abortion in many other countries and quote the concerns of CEDAW in 2015 about the negative effects of criminalisation of abortion. They close with the slogan:

(Sexual education to be able to decide, contraception to prevent the need for abortion, and safe abortion so as not to die.)