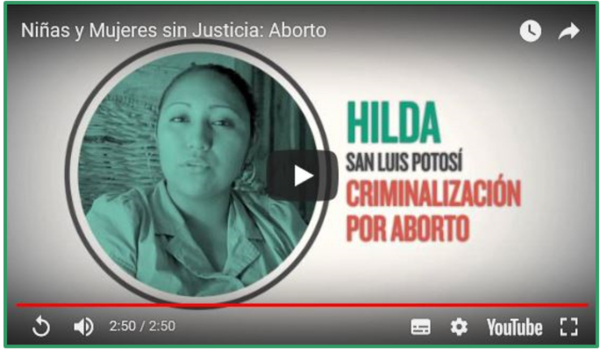 “Marimar” was 17 years old when she was raped and became pregnant. She reported the crime to the authorities in Morelos, Mexico, where she lived, and requested an abortion. The prosecutor’s office sent her to the hospital. Although abortion is legal on grounds of rape in Mexico, the bioethics committee at Cuernavaca General Hospital where she sought help kept her in the hospital for two weeks, eventually denying her an abortion. In 2016 “Fernanda” was raped by an acquaintance and became pregnant. She requested an abortion several times from the health services of Oaxaca. The hospital was on strike and did not do anything except acknowledge her requests and she did not get access to abortion care.

These young women had the right to a legal abortion in all 32 states in Mexico under a federal “victim’s law” which allows a woman or girl older than age 12 years who has become pregnant due to sexual assault to access abortion from any public health clinic. She is not required to file a report with the police or receive the authorisation of a court or a parent. The law defines abortion care in these circumstances as emergency medical services.

According to a report by the Executive Commission on Attention to Victims, one in four girls is sexually assaulted before the age of 18 years old in Mexico, and the majority of pregnancies in girls under the age of 14 are the result of rape. Still, women and girls who become pregnant as a result of a rape are routinely denied access to legal abortion in many Mexican states. GIRE (Grupo de Información en Reproducción Elegida) found that between 2009 and 2016, 111,413 complaints were received by the state from women and girls who had been raped and were denied a legal abortion. Only 63 legal abortions were reported by the health system during that period.

“Marimar” and her parents took her case to court with the help of GIRE. It took three years for the case to be heard. In early May, the Supreme Court voted unanimously in favour of “Marimar”, recognising that the denial of a legal abortion after rape constitutes a violation of reproductive rights.

Days later, they delivered the same ruling in Fernanda’s case, also with the support of GIRE. These are important victories, that now need to be implemented at state level.