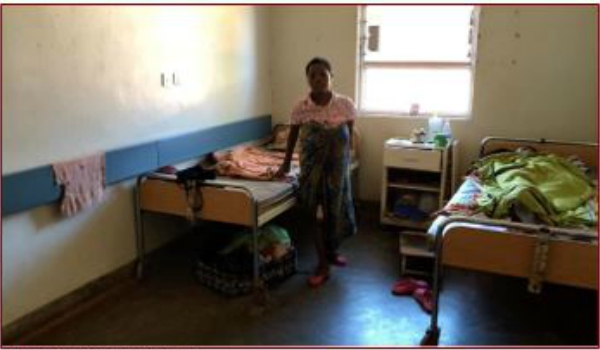 In a hospital room in Thyolo, a southern Malawian town nestled in tea plantations, Ngellina Chikopa unwraps her sarong to reveal a long wound filled with pus. The cut stretches from her lower abdomen through her belly button and up past her stomach.

The 18-year-old gave birth by caesarean section in April 2018, but the baby died of asphyxia after becoming stuck and suffering brain damage from lack of oxygen. While she was grieving, the wound became infected. She was given IV antibiotics but the wound started to release foul-smelling pus. The infection spread to her uterus. Doctors gave her more antibiotics but they didn’t work.

Next, medics performed a hysterectomy, an operation to remove her womb. But afterwards, she suffered another infection and was transferred to Queen Elizabeth Central, a big referral hospital in the city of Blantyre, where she had another two operations to clear the pus and close the wound. She was discharged but is back at Thyolo hospital because her stomach is not healing. She shares a room with a young woman called Margaret, who also lost her baby to asphyxia.

Chikopa fears she will be ostracised now she cannot have children. There is a stigma attached to being both unmarried and childless. “I know that I will never ever have children in my lifetime, I have accepted it with a lot of pain as there is nothing I can do about my situation,” she said. “Some relations are aware of my situation and by now I know the social discrimination that I will be facing out there.”

She hopes to return to school when she recovers.

Scores of women in Malawi face having their wombs taken out because of infections. Dr Martha Makwero, acting head doctor of the maternity department at Queen Elizabeth Central Hospital, said 36 women had had hysterectomies due to infection between March and May this year. At Zomba Central Hospital, around five women have their wombs removed every month, said Dr Maguy Kabeya, head of the maternity department, who carried out a three-month observation this year. He said they were referred from district hospitals and health centres where infection prevention is sub-standard. Some of the women died.

Other central hospitals in Malawi did not provide figures on hysterectomies.

In Malawi, malnourishment or diseases such as HIV – which affects around 10 percent of the country – suppress immune systems. Infection control in rural health centres and district hospitals is poor.

Half the healthcare facilities lack clean water and sanitation. Electricity blackouts mean equipment used during labour may not be sterilised properly. Hospitals frequently run out of essential supplies such as chlorine, soap and antiseptic gloves.

Women are also asked to bring certain items to the hospital for the birth: a plastic sheet called a macintosh, a razor blade to cut the cord and a plastic tub to bathe the baby. These aren’t sterile, which increases the chance of the mother catching an infection…

[Editor’s note: This is the full text of the first half of this article. I hope Al-Jazeera doesn’t mind our sharing it at length in hopes it will have an impact. The whole can be found at the link below. I urge everyone to read it through. It is a tale of gross neglect, not only of pregnant women but in the provision of health care across the board. It is a call to action for Malawi that is exceedingly urgent.]