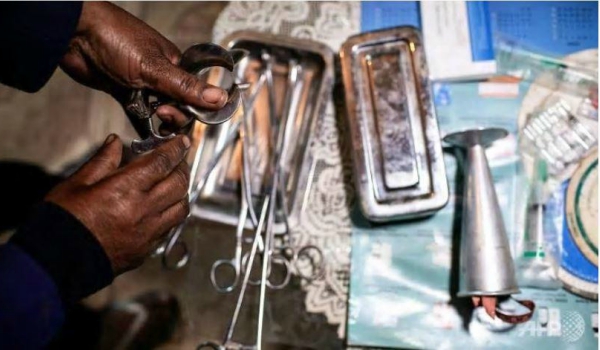 Abortion is illegal on Madagascar. Although prosecution is rare, an attempt to decriminalise abortion was pushed back by the parliament in 2017.

A 44-year-old woman with six children keeps a secret behind a flimsy wooden gate at the back of her vegetable garden. “There are around eight fetuses buried here,” she said. “With them lies a baby delivered prematurely at seven months.” In each case, she said, when they were removed from her body, she felt only relief as having another baby “would be hell”. With mouths to feed, no running water and an alcoholic husband, she says, she has “had enough”. She says her husband would turn violent if she refused his sexual advances. When she gets pregnant, abortion is her only way out.

She is not alone. Women have between two and eight abortions over the course of their lives, said Mbolatiana Raveloarimisa, co-founder of safe abortion advocacy group Nifin’akanga, which takes its name from a powerful blue-flowered herb that is often used in backstreet abortions.

Women who provide abortions are often called “angel makers”. One method used is to infuse avocado leaves for the woman to drink, then enter her with a tube or a ball of the herb and massage the abdomen to provoke contractions. The procedure takes up to three days and can be excruciating. The cost is US$ 2.70. Another woman, a retired midwife, uses a faster method at her home, over a blood-stained tarpaulin amid the pungent smell of urine. She gives anti-spasmodic medication and then pulls out the fetus using a speculum and pliers. This costs US$ 55.

Abortions and miscarriages kill an average of three women per day in Madagascar. Many suffer bleeding and infections after inserting themselves with banana peels, nifin’akanga, clothes hangers, bleach and/or ash. They are treated in public hospitals. “The biggest risk is organ perforation,” said Anderson Randriambelomanana, head of the maternity ward at Antananarivo’s Andohatapenaka hospital. “Our duty is to cure rather than castigate.”

The country has a fertility rate of more than four children per woman, but contraceptive use is almost non-existent. Getting an appointment would cost poor women half a day’s work and availability of contraceptives is poor.