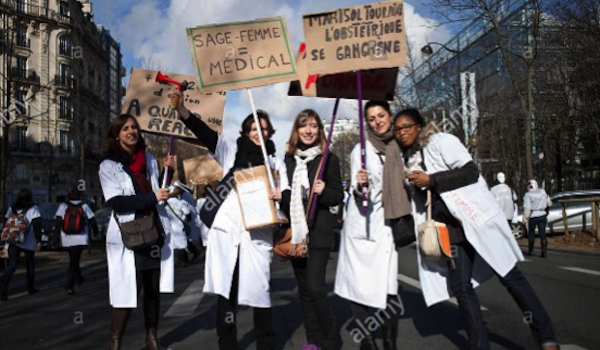 Following a government decree of 5 June 2016, midwives will soon be able to provide medical abortion pills up to seven weeks of amenorrhoea (nine weeks LMP) without the supervision of a gynaecologist. To promote knowledge of this new policy, the Department of Health launched a communications campaign on 22 June to raise public awareness of this expansion of midwives’ roles.

The communique states that they “have had to react in the face of this attempt to pit two professions against each other that have always worked in complementarity and in good agreement“. What concerns them, they say, are a series of measures that the government has justified as needed in order to facilitate greater access to care for women, especially in rural areas. Their main concerns are that:

– there is no guarantee that existing gaps in medical care will be filled by midwives, yet the primary care of women and children would be devolved to them (Pap smear, vaccinations, ultrasound, reviews of the infant, deliveries, contraception, abortion, installing IUDs);

– the government suggests that to consult a midwife is identical in terms of access to health care as to consult a doctor, while the level of training and competence are far from being the same;

– the level of responsibility, particularly in the national insurance plan, between doctor and midwife is not the same. This means that if a mistake is committed by a midwife in the course of proposed care, it will be up to a physician to correct, repair and where appropriate to take responsibility for what happened, even though the situation was not of their doing.

The statement also criticises the recent advertising campaign on the website of the Ministry of Health to encourage women to consult midwives.

The response of Marie-Josée Keller, President of the National Council of Midwives, on 30 June, in a story in Le Monde, was that the Council was “deeply saddened” by these statements.

The crux of the problem, says the Le Monde article, is competition. Since 2009, midwives have been permitted to provide a growing list of sexual and reproductive health services, including contraception, Pap smears and more. More and more, midwives’ training, though lasting fewer years than that of obstetrician-gynaecologists, allows them to acquire skills which overlap with those of the doctors. This is because the procedures involved have been simplified so much.

This is a conflict that affects everyone in these two professions, not just in France.