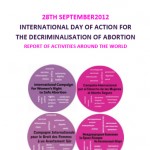 Activities in 2012 ranged from information workshops, to marches, to demonstrations outside government buildings, to public meetings, to drama workshops, to surveys to art exhibitions. Some activities were carried out by established campaigning groups, some saw groups address this issue publicly for the first time, including groups with a focus on equalities or HIV/AIDS, or saw the formation of new groups. Their focus was different in each instance: calling for legislative change, clarification of the law, or demanding that the law be implemented properly, increasing access and improving services. Some activities took place in areas where abortion is routinely debated, others where it is barely spoken of, where simply promoting the event with abortion in the title was in and of itself a step towards destigmatisation of abortion and breaking the taboo that surrounds it.

However and wherever the day’s activities took place, they were underpinned by the knowledge that safe abortion saves lives and the overarching purpose of ensuring that women have access to safe abortion, wherever they live in the world. It is significant that in many countries where legislative change is a long way off, many of the activities focused on how to make illegal abortion safer – disseminating information about how to access and use misoprostol, and promoting safe abortion hotlines. Others highlighted the availability of services to manage complications of unsafe abortion and called for more of these.

Many of the activities got press coverage in national newspapers – helping to reach a wide audience with the message that safe abortion is a necessity and a right. What is clear from the list of activities and the map of where in the world these took place is that people are no longer prepared to wait for the small incremental changes that their governments may have promised, but seem not to have materialised. Nor will they continue to sit by and watch as their rights are stripped away. They will not be silent as another woman dies, another girl – pregnant as a result of rape – is denied an abortion, or another woman, parent or doctor is imprisoned for breaking punitive anti-abortion laws.

Despite the urgent need for change, and the seriousness with which we are campaigning, it is uplifting to see the creativity, and humour of campaigners shining through. The activities captured here are by those that made contact with the International Campaign.

The 28th September has proved to be a fantastic focal point for campaigners. The International Campaign aims to maintain that energy across the calendar year, building the capacity of groups to campaign in their countries and regions, to build effective coalitions and bring about real change. Countries where activities took place: