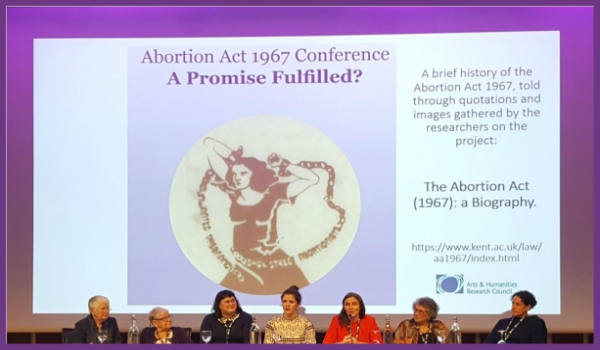 This week marks the 50th anniversary of the 1967 Abortion Act in Britain. The conference: ‘The Abortion Act 1967: A Promise Fulfilled?’ was an action-packed, two-day event organised by Sheelagh McGuinness and Sally Sheldon, and hosted by the Royal College of Obstetricians and Gynaecologists. The conference took attendees through the 50-year social, political and historical course of the Abortion Act in Britain, with excellent contributions by the panelists.

What is holding Britain back?

In the years since the Act was passed, a lot has changed – the world around us, medical technology and service provision – and many reform bills trying to restrict the Act have been tabled unsuccessfully. The application of the legislation has also changed – causing confusion. Many nurses are able to manage abortion care, but two doctors are still required to approve the procedure and medical abortion pills must still be prescribed by a doctor. Abortion is also the only clinical procedure governed by the criminal law.

One thing does persist: stigma – among parliamentarians, health professionals and anti-abortion activists. Other issues were raised that still remain to be addressed such as contextualising abortion as a reproductive right, resolving disagreements over the upper time limit and its consequences for individual women and the extent of conscientious objection permitted if any. And the meeting exposed the 50-year-long failure to make the Act a truly national law by excluding Northern Ireland.

On a personal level, for women with unwanted pregnancies, practical issues beyond legislation continue to affect access to abortion care. These include travel, time off work/study, financial resources, geographical location in relation to services and emotional support. In some ways, the Act as it stands still limits some women’s autonomy, which results in them falling through the cracks – for example, those affected by domestic violence, undocumented migrants and those beyond the time limit – potentially causing them harm. I believe the conference did not go far enough to address these situations.

Religion (the Catholic Church was referred to several times) and the politicisation of abortion remain the biggest elephant in the room – by infantilising women as individuals requiring moral supervision and reducing women to mere vessels for producing babies.

What about the Act’s global impact & innovative models for reform?

Globally, the Act influenced many countries (Canada, India, Hong Kong, Singapore); the conference only covered the impact the 1967 Act had in New Zealand and Australia, however, especially the tensions it created amongst anti-choice groups, politicians and second wave feminists. The struggle to legalise abortion was much like that of Britain, and their provisions reflected and adopted the same language as in the 1967 Act. It was disappointing not to have heard about how the Act impacted other Commonwealth countries, especially those in the global south.

As for innovative models for reform, although Britain was one of the first countries in Europe to provide safe and legal access to abortion, it was suggested that we could take some inspiration from neighbouring countries as we seek to liberalise access. Going a step further, Women Help Women are challenging the ways in which abortion can be provided through telemedicine and mobile-health – couldn’t these be implemented in Britain? The very positive response from participants, perhaps, showed there was support for self-administration of medical abortion pills and community-based management by nurses and even pharmacists. Putting abortion in the hands of communities sounds scary to many, though, with the belief that deregulation would cause all hell to break loose, there is no evidence that such a thing is a risk. What is apparent is that legislation does not translate easily into medical practice and vice versa, and that change occurs more quickly in medicine than in the law in most cases. The humanisation of legislation on abortion is essential for ensuring it reflects what we women need.

So where does Britain go from here?

Well, Diana Johnson MP hopes to table a bill to decriminalise abortion up to 24-weeks gestation.  Many believe this is a good time to reform the law: there is minority government, more women in parliament and (supposedly) more pro-choice MPs though the latter has not yet been proven. It is agreed that for a bill to have a good chance of success, it must be cross-party effort. Public opinion shows that abortion is no longer seen as a controversial topic.

The younger generation of health professionals in the conference all expressed enthusiasm towards abortion care, calling for more information about it to be provided in lectures and work placements, and not for it to be addressed solely in relation to medical ethics… They called for role models in the field, and importantly for providing abortion as an act of social justice.

There was an overwhelming consensus at the conference that abortion should be decriminalised, to greatly expand the role of nurses in abortion care and greatly reduce the role of gynaecologists, and finally moving towards women self-administering medical abortion. All of these would take away a good deal of the bureaucracy that delays and limits access to abortion care, and importantly, calls for putting women’s rights and autonomy at the heart of any future legislation.

What is clear, however, is that many women of reproductive age have benefited from the 1967 Abortion Act, which has provided a safe and legal space for abortions for individuals with an unwanted pregnancy. The conference and the 50th anniversary of the 1967 Act remind us that women have abortions because they need them. The law and those who have contributed to developing and implementing it, and still do, have inspired and empowered many to exercise their rights daily, in Britain and beyond.