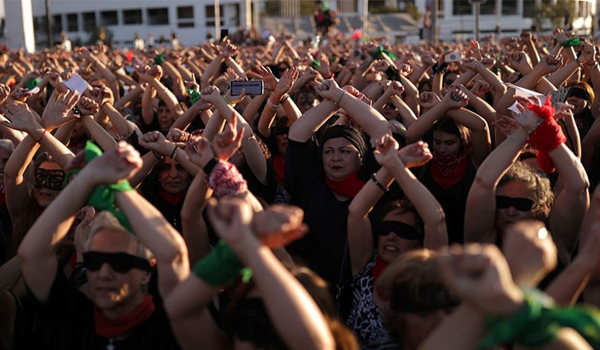 From Santiago to Nairobi, Tijuana and Stockholm, women in more than 200 cities worldwide have acted out a Chilean feminist performance, protesting sexual assault, victim-blaming and state violence. Created by the LasTesis feminist collective in Valparaiso, “A rapist in your path” has now been performed in more than 40 countries on every continent (except Antarctica). Uruguayan feminist, Isaura Fabra, who mapped the phenomenon, said it spread very quickly, involving thousands of women. It is an indictment of the perpetuation of rape culture by the state and society.

The title “A rapist in your path” alludes to “A friend in your path”, the official slogan of the Chilean Carabineros police force in the 1980s and 90s, and the lyrics and choreography both include specific references to them. State forces used sexual violence as a component of torture of political dissidents during the 1973-1990 military dictatorship, and allegations of sexual violence by Carabineros and other forces have recently become the subject of renewed attention.

Nationwide mass protests against structural inequality broke out in Chile just over two months ago. The National Human Rights Institute has documented 194 cases of sexual violence by authorities in the context of protests and detentions, and has filed 117 legal motions against authorities for sexual violence, including four cases of rape.

But women do not need to know the Chilean context for the performance to resonate, said Fabra. The power of “A rapist in your path” is its universality and adaptability. Women in many countries have tweaked the lyrics to reference local cases and conditions.

“In every place, the patriarchy presents itself a little differently. But the issue of rape is fundamental,” she said.