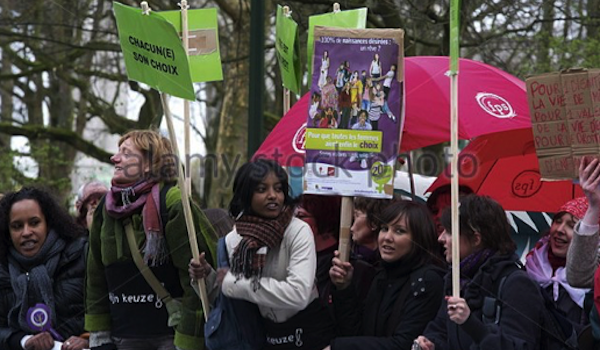 In 2016, Belgian politicians will (perhaps) finally decriminalise abortion in Belgium. Muriel Gerkens, member of the Ecolo (Green) Party, has tabled a bill to remove abortion from the Penal Code so that it is no longer regarded as a criminal offence. This is not the first attempt to do so, but maybe, says the author of this article, in 2016, its time has come.

The legislation concerning abortion is often attacked. Should it be punished more? Should certain conditions be modified so that, in some cases, the woman – and her entourage – are punished? The Ecolo party is against any such changes. “Every such attempt,” says Muriel Gerkens, “constitutes an infringement of the rights of women. They believe that in any case, abortion should not be punishable. It is therefore important to send a strong signal by strengthening the law.”

Notion of distress: out!

The bill also addresses the notion of distress. The current Belgian abortion law decriminalises abortion partially if a medical team recognises that the woman is in a “state of distress”. This notion of “distress” has been regularly subjected to debate. In 2014, it was considered too subjective, and that is also the opinion of the Ecolo Party. Only the medical staff are permitted to judge this state of distress and they cannot, Ecolo says, judge this in an objective manner. Therefore, their judgment is “exclusively a value judgment, which may not have a place in a legal arsenal where abortion is a duty of public health,” said Muriel Gerkens.

In Luxembourg, existing legislation says: “Any woman who faces an unwanted pregnancy is in a situation of distress.” In this sense, therefore, distress is “an intrinsic condition” in the face of an unwanted pregnancy, which cannot be subjected to “interpretation by others”.