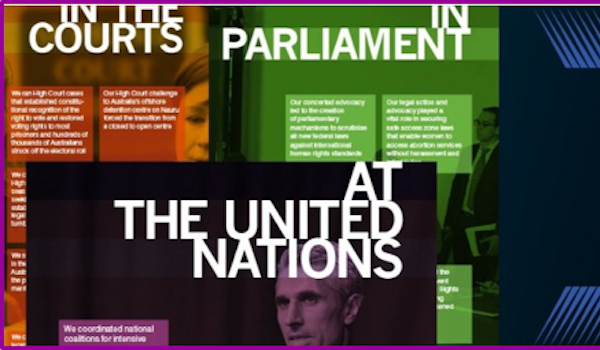 In December 2016, the Northern Territory Government published a Discussion Paper that contains various proposals to reform abortion laws in the Territory. The Human Rights Law Centre (HRLC) welcomes this opportunity to comment on the proposed reforms.

The HRLC is a national human rights organisations whose mandate includes the protection and promotion of women’s reproductive rights. We have worked closely with Family Planning NT and What RU4 NT in relation to the proposed reforms.

Across Australia, the HRLC has advocated for the successful decriminalisation of abortion in Tasmania and Victoria, and for the current proposals to reform abortion law in Queensland. We also support safe access to abortion clinics. In 2015, we acted for the East Melbourne Fertility Control Clinic in its legal bid to end decades-long harassment by anti-abortionists out the front of its premises. We strongly supported safe access zone legislation in Victoria and the ACT.

The HRLC commends the Government’s commitment to reforming abortion laws, guidelines and services in the Northern Territory. In particular, we are supportive of proposals that would:

(c) impose an obligation on health practitioners to refer where a conscientious objection is held; and

(d) remove the requirement for parental consent for girls who are competent to provide consent.

(a) There is a lack of clarity as to the extent to which abortion will be decriminalised. The use of criminal law to regulate abortion creates fear for women and doctors and is a barrier to accessing an essential reproductive health service. In criminalising a service that only women need, the Northern Territory discriminates against women. The HRLC considers that reference to abortion in the Criminal Code (NT) should be repealed, including section 170, and replaced by:

(i) a provision that makes it an offence for an unqualified person (but not a pregnant woman) to perform an abortion; and

(ii) inserting into the definition of ‘serious harm’, the destruction of a pregnant woman’s foetus, except during a medical procedure.

(b) Women will still be required to seek approval from doctors for their decision to have an abortion and ground their decision-making in psycho-social considerations. What this means in practice is that doctors take on the role of gatekeeper and woman are viewed as incapable of making decisions about their bodies – they must seek approval for treatment, rather than making the decision themselves after receiving information and advice from their doctor. The NT government should reform the law to ensure that women have the right to choose to have an abortion at any stage of their pregnancy, without requiring a doctor to approve their decision. If the government wishes to place gestational limits on when a woman has the right to choose, such limits should not apply before 24 weeks.

(c) There is no provision for abortion after 23 weeks pregnancy. It is understood that the current law will apply after 23 weeks gestation, which only permits abortion to save a woman’s life. Very few pregnancies are terminated after 20 weeks, but when they are, the circumstances are more likely to be distressing. The current law would force a woman to continue with a pregnancy where she is 24 weeks pregnant and has been told the foetus has a serious or fatal foetal abnormality, or where she is pregnant because of rape. The new abortion law must therefore allow abortion after 23 weeks in a broad range of circumstances, similar to the Abortion Law Reform Act 2008 (Vic).

(d) The proposal states that the provision of counselling will be a requirement before an abortion can be performed. No evidence is provided by the Government to suggest that forcing women into counselling is beneficial for them. The new abortion law should not mandate counselling or a referral to counselling.

(e) While doctors who hold a conscientious objection will have a duty to refer a woman to a doctor who does not hold such an objection, further reform is required. First, the duty to refer should be extended to other health professionals, including counsellors, who might be a woman’s first point of contact for information about her options. Second, the law must ensure that in medical emergencies, where an abortion is required to save a woman’s life or prevent serious harm, doctors and nurses with a conscientious objection are still compelled to perform or assist with an abortion. This approach balances the right of health professionals to act in accordance with their conscience and religious beliefs with the right of women to life, health and autonomy.

[The rest of the paper goes into these issues in more legal language and proposes specific clauses on each of these issues for a revised law. While you may not agree with everything they suggest, the recommendations are food for thought and discussion.]

The Human Rights Law Centre protects and promotes human rights in Australia and beyond through a strategic mix of legal action, advocacy, education and capacity building.