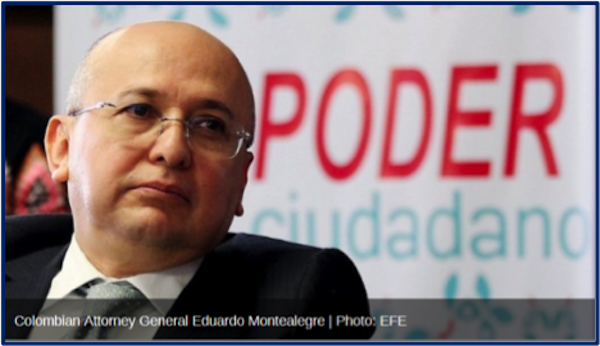 Hours before leaving his post, Colombia’s outgoing Prosecutor General Eduardo Montealegre presented a 75-page bill to the country’s Congress in which he urged them to decriminalise abortion up to 24 weeks of pregnancy.

“There are several legal, constitutional, social and public health reasons, and even criminal policy, justifying the decriminalization of abortion in Colombia. Precisely for these reasons it is necessary to extend the number of weeks up to which women can have an abortion beyond the first trimester, to avoid the need for women to resort to unsafe procedures that endanger their health or life,” reads the document.

In essence, the proposal calls for abortion to be at the woman’s request up to 24 weeks of pregnancy, within a framework of the “empowerment of women”, and beyond that for it to remain legal to protect the woman’s life or health, on grounds of rape, sexual abuse of forced artificial insemination, or serious fetal anomaly. The latter are the current grounds for all abortions under the law.

Montealegre has long been a supporter of liberalising the abortion law in Colombia. He is confident that the legislature is ready to approve such a motion. “It is a difficult issue that is controversial, and there are very respectable religious views, but Colombia should be prepared to take this step because you have to advance the protection of women and their fundamental right to decide freely,” he said.

While several anti-abortion members of Congress were vociferous in response, the high numbers of illegal abortions have sparked much debate on the need for reform. Cristina Villarreal, member of La Mesa por la Vida y la Salud de las Mujeres, said: “While the proposal may not be given legislative time, and Montealegre is no longer in a position to defend it before Congress, it is very important that the discussion is moving towards a wider decriminalisation of abortion, even up to 24 weeks, which has the support of the feminist movement, even though the best scenario would be to take abortion out of the penal code altogether.”