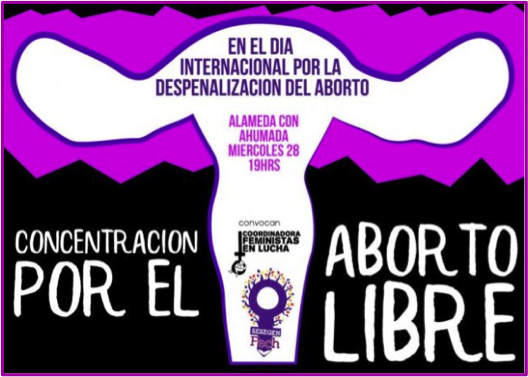 A number of feminist groups are organising actions in several Chilean cities for free and safe abortion.

In Santiago, la Sesegen FECH and Feministas en Lucha are organising a demonstration from 7pm today, and in Valparaiso there is a march from 6:30 pm local time. For action in Temuco you can find information on Facebook. The hashtags are: #DerechoADecidir #YoDecido #28Septiembre.

Additionally the documentary “Linea aborto Chile” (Chilean abortion hotline) will be shown for the first time in different cities. For example, the documentary will be shown in Iquique this evening local time: The documentary is about the seven-year history of the hotline and its accomplishments. The hotline was initiated in 2009 by the group Lesbianas y Feministas por el Derecho a la Información en Chile and has answered more than 20,000 calls from women asking for information about abortion.