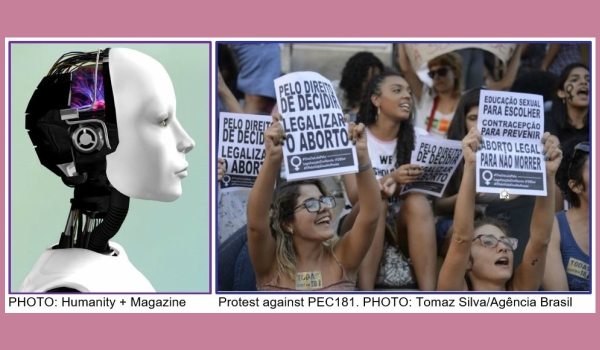 Perhaps the most creative and innovative response to the various rollbacks on women’s reproductive rights in recent times in Brazil has been Beta, a feminist robot on Facebook, created by Nossas, a national network of citizens’ rights organisations across Brazil. Before Beta was even formally launched on Facebook, “she” organically accumulated 10,000 likes through word of mouth and peer recommendations. Beta works through the Facebook inbox function, and informs everybody who agrees to receive her updates of any attempts to reform legislation or policy drafts on the table that may threaten women’s rights.

“Beta was important when PEC181 (the proposed bill to ban all abortions in December 2017 which was passed by an almost all-male parliamentary committee) became a political issue on the table, exactly because she is capable of rapidly and practically mobilising women across Brazil: either through chatting with them or alerting them with notifications, and women were notified that PEC181 would be voted upon and that they needed to get into action. Since they didn’t need to leave their Facebook inboxes in order to send emails directly to the authorities, pressuring them to vote against PEC181, engagement was very high,” said Laura Molinari, advocacy coordinator at Nossas.

Beta will make sure that Brazilians have access to information about how this bill is progressing through Congress, and other similar bills that threaten women’s rights in the country.