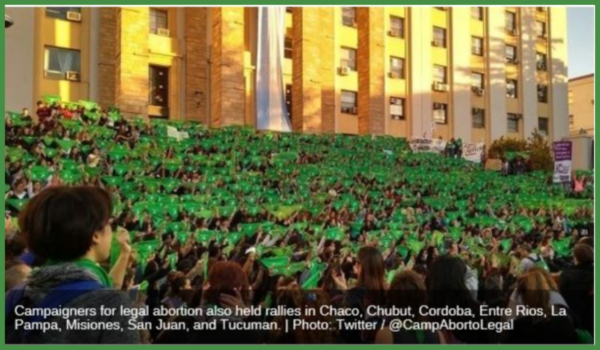 Starting on 21 May, the Campaign began to circulate a petition from Argentina to express support on the part of the international community for the comprehensive and democratic debate that is currently taking place in the four Commissions of the Argentinian Congress, and will lead to debate and a vote in June. The letter said we sincerely hope that the members of the Congress will vote in favour of the bill put forward by the abortion rights movements in the country, the 7th such attempt, and the first to be tabled and have a strong hope of success. The final debate is scheduled for June 13.

We are pleased to announce that the petition garnered 409 signatures and was presented on 28 May, the International Day of Action for Women’s Health, to the Secretaries of the four Commissions and the Administrative Secretariat of the Commission on General Legislation.

Also on 28 May, to celebrate the 13th anniversary of its founding, the National Campaign for the Right to Legal, Safe, and Free Abortion held massive demonstrations to support the legislative initiative to decriminalise abortion on all grounds up to 14 weeks of pregnancy. Rallies took place across Argentina, from the northern province of Salta to the southernmost Tierra del Fuego.

Martha Rosenberg, one of the campaign’s founders, told the newspaper Pagina 12: “I think we have done a great work that we call the social decriminalisation of abortion, which went from being a taboo, a stigmatised topic, to a priority political issue.”

In Buenos Aires, a spokesperson read a declaration in which they affirmed, in reference to the Mothers of Plaza de Mayo, “once again in the history of our country a scarf unites us in sisterhood”.

In the declaration the Campaign urged legislators to hold a respectful debate and criticised arguments against decriminalisation intended to shock.

As the legislative debate enters the final stretch, the church has increased its pressure on legislators. However, according to Daniel Lipovetzky, coordinator of the debate in the Congressional Commissions, the church “is taking a wrong attitude. An NGO can do that, but not the church in a secular state”. Despite recent attacks by the church and the fact that preliminary vote counts show a tie, the Campaign is optimistic that abortion will become legal under Argentine law.

Demonstrations continue into the evening saying Legal abortion is life – for women. @CampAbortoLegal