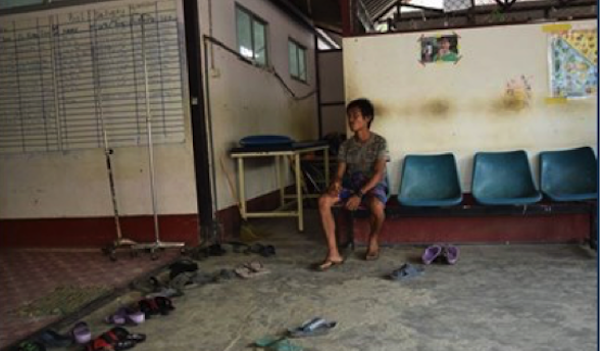 “One of my friends is five weeks pregnant. She is uneducated and poor. Her boyfriend ran away when she told him that she was pregnant. She’s crying and helpless. She’s thinking about abortion with an unlicensed nurse. It’s too dangerous for her… It’s been five weeks.”

This is an email that Women on Web received last year from a distressed woman in Burma, a country where abortion is only permissible where the woman’s life is at risk and otherwise punishable by three years in prison. Women on Web advised her that misoprostol is available legally over the counter at a pharmacy in her town in Burma and gave her information on how to use it safely. Most women in Burma don’t receive this information, however.

According to Ipas, more than 246,000 Burmese women attempt unsafe abortions annually. As a result, 10% of maternal deaths result from unsafe abortion, the third leading cause of maternal mortality. Along with the harsh realities of sexual assault, limited sexuality education and widespread poverty, many Burmese women are inserting something in their cervix, or pummeling their abdomen to try to bring on a miscarriage.

The Mae Tao Clinic is famous for its care for Burmese migrants who cross the border into Thailand searching for help. The clinic treated 49 women suffering complications of incomplete abortion in February alone. “Incomplete” is a benign way of describing the very real consequences of a botched abortion attempt. Most of the women seeking a termination at Mae Tao cite financial problems, an unfaithful partner or the stress of having too many mouths to feed already.

AT, a 25-year-old woman from Myawaddy, is curled up on a makeshift hospital bed in one of the Mae Tao Clinic’s wards. She says she paid a village midwife 100,000 kyat (US $82) to end her 11-week pregnancy. The woman gave her a combination of unidentified vaginal and oral drugs and inserted a stick into her uterus through her vagina. This resulted in septicemia and internal injuries. The midwife had intended to do a manual extraction, but when AT developed a fever it could not be done. Her partner took her across the border in search of help.

Through a translator, she spoke of crippling poverty and the stigma attached to living with her partner out of wedlock. “[The midwife] tried to dilate my cervix and used scissors to remove the fetus… She told me to come to the Mae Tao Clinic, but said I should not tell them about the instruments she used… It hurt very badly.”

MH was born in a refugee camp, but these days you can find her pacing the floor of the reproductive health inpatient ward at the Mae Tao Clinic. Some days she’s delivering babies and comforting expectant parents, other days she treats women who turn up with the consequences of backyard abortions. She says women come across the border suffering fevers and injuries from failed abortions. Many recover, but many others succumb to their injuries. The needless loss of life is a symptom of Burma’s crumbling health care system and conservative views on women and sexuality.

MH says many of the women she treats weren’t using any form of contraception. Before they are discharged, staff at the Mae Tao Clinic discuss contraception and commonly offer oral contraception or Depo-Provera to the women.

The women who are seen at the Mae Tao Clinic were able to travel across the Thai border to get help. But in desperately poor and isolated parts of Burma such as Arakan and Chin states, no alternative exists to “traditional” medicine.

The persecuted Rohingya minority, predominantly sequestered in Arakan State, are said to face denial of health care so bad that it has been deemed genocidal. A 2011 study seen by human rights watchdog Fortify Rights found that over one third of Rohingya women in the state had undergone at least one abortion, and one quarter had suffered multiple clandestine terminations.

Fortify Rights fears that Burma’s recently passed Population Control Healthcare Bill, which mandates 36 months between pregnancies, will only increase the strain on women and families. Critics have questioned how this law will be enforced. Burma’s legal and health framework has a long way to go before it catches up with the realities of life for many women in Burma. That means health care workers like MH will continue to deal with the consequences of dangerous abortion methods, and women like AT will continue to suffer from them.